Share on FacebookShare on TwitterShare on LinkedInShare on Email

A Long-Time Corporate Lawyer Goes Out On A Limb 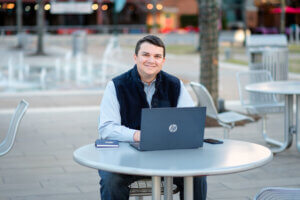 In the first week of January 2021, Will Stafford quit his job at a demanding corporate law firm in Houston, and started his own law practice. It had been four years in the dreaming, but on day one, facing no revenue, he had the same realization that most NLBM lawyers do:

“We would all love for it to be super profitable from day one, but that’s just not the reality of 99.9% of startup businesses. And a startup law firm is like any other startup business in that way.”

But those meager beginnings slowly began to blossom. By the end of February 2021, his revenue had grown to $9,000 a month. But even that growth was just the beginning.

In a recent NLBM webinar Will commented that he didn’t think he could stop the forward financial movement, even if he tried.

How did a former corporate and transaction lawyer with almost no experience in Estate Planning begin a law practice generating over $250,000 in revenue in his first year of business?

Turning The Seeds Of Ambition Into Action

When Will started practicing law in 2009, he decided to focus on Corporate Law, but quickly he found himself feeling overworked and under-inspired. As with so many young lawyers, the rigor and demand of 50- and 60-hour work weeks left him disenchanted with his current state, and wondering what else might be possible. Along those lines, Will began thinking about starting his own business—an entrepreneurial impulse that didn’t just start with him.

“My father is an entrepreneur and has been my whole life. I have a little bit of that ‘entrepreneur gene.’ I always had in the back of my mind side hustles. I had tried to do this thing or that thing on the side while maintaining my more traditional lawyer practice. I was never a great employee.”

Like many other Entrepreneurial Lawyers, Will began to grasp that what he wanted was a boss who understood his growing constraints of ambition, time, and juggling family responsibilities and desires. The kind of boss who was both flexible and empowering. Will came to the conclusion that no one would understand any of those things better than he would. He said he realized, “I’m the best boss I’ll ever have.” So he started looking into ways he could make that happen.

In 2017 Will began the process of researching other options for law practices and that’s when he stumbled upon NLBM. He joined the mailing list and periodically interacted with the content, webinars, and other offerings. He admits that he actually went through the discovery call process multiple times, but remained worried about how the decision might impact his life and bottom line.

Then, in the midst of the COVID-19 pandemic, Will found himself working from home for months and building out a client list in a fully remote environment. And that’s when it hit him:

It wasn’t simply the remote work or Will’s entrepreneurial spirit that ended up inducing the change, but the career advancement and return on investment (ROI) reality as well.

“I’d gotten to a point in my law firm career where, to keep progressing up the law firm ladder, I felt like I was going to be bringing a lot more value to the firm than I was going to realize in my checking account.”

With all these thoughts and experiences mounting up, Will knew it was time to make a decision.

NLBM Grows The Numbers And The Practice

In the summer of 2020, Will enrolled in the NLBM Estate Planning Bootcamp. The program taught him the essentials he needed to begin the process of leaving his old law firm.

He put together a plan to quit his job at the beginning of January 2021, and immediately transition into his new practice using NLBM as his guide. He also says the decision to move from the NLBM Bootcamp to full-fledged NLBM membership was nearly automatic.

Along with the jump from $9,000/month starting in month two, to $35,000/month by month six, the methodology of NLBM was just as freeing to Will as was the revenue in his bank account.

“The most interesting thing about the NLBM approach…is that it takes a really holistic relationship-based approach to Estate Planning.”

This approach was all the more important to Will for a very personal reason. After practicing law for nearly 70 years his grandfather passed away. Though his grandfather had set up wills and trusts for his family when he was younger he hadn’t updated them because he didn’t have any kind of real relationship with his attorneys. The end result was his estate wasn’t taken care of which meant, when he died, Will’s family had to go to Probate Court to sort out the details of the estate. Will remembers it clearly:

This hard-learned lesson that was watching his own family deal with the unmanaged estate of his grandfather helped Will know exactly what kind of Estate Planning law practice he wanted to run. NLBM supported him in doing that. From getting his practice off the ground, to helping him grow it, the community and guidance of NLBM have been transformative for his life and practice.

“What the NLBM method really does give you is a framework to build your law firm around the life that you want and make it flexible enough so that as your life changes, the law firm just changes right along with it. Having flexibility of time, and being the master of your own schedule, calendar, work week.”

The Results Of Will’s Labor And NLBM’s Guidance

NLBM has continued to help Will consistently grow his practice. Along with the aforementioned $20-30k\month revenue, Will’s firm earned just over $250,000 in its first year. He’s already set his sights on the goal of $500,000 for 2022, and he’s confident he will achieve it.

Along with revenue, Will’s close rate as an NLBM lawyer is a jaw-dropping 96%, and he’s begun to consider raising his prices as a result of his high close rate.

But the successes weren’t all monetary. After that incredible $34,000/month revenue, Will and his family took a two-week vacation. No work, no phones, no clients, just two months of quality time with the people he loves most.

For Will, getting to have the practice he wants, alongside the life that he wants, was the greatest gift NLBM could have given him.

The Practice You Want. The Lifestyle You Deserve.

“I came into this with as little experience as anyone. We’re building something that’s growing aggressively and growing quickly and hopefully will continue growing for many, many years, and eventually grow it to the point where I’m not doing any of the day to day anymore, but just managing the business. The NLBM approach has a clear pathway for all of those things. It’s nice to feel like I’m not doing it all by myself. I’m following in the footsteps of those who’ve done it before.”

Will has advice for lawyers who are looking into the NLBM program:

“NLBM is a framework within which you can build a practice that completely melds the practice you want, with the kind of lifestyle you want. Get out from being stuck floundering around. NLBM allows you to focus on what does work, and what’s proven to work.”

The NLBM program has worked incredibly well for Will’s law practice, and it’s worked for so many others just like him too. Trust that it can work for you as well. Besides Case Studies like Will Staffords’ we’ve got an excellent way for you to hear about how the NLBM program has worked for lawyers just like you. Take a few moments to listen to the stories from several Members Lawyers.

After you do that, let’s talk about how NLBM can get you started down the path to the law practice and lifestyle you’ve always envisioned.